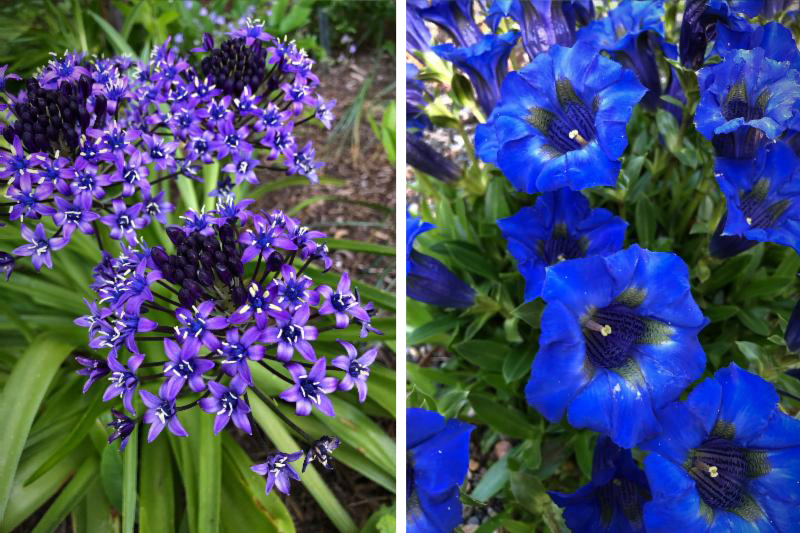 Flowers come in almost every color and you’ll find a kaleidoscopic range in bloom at Heronswood this weekend. From pure white trilliums to dark, sultry arisaemas, we have every shade covered. But there’s one color that’s far from common and that’s blue. Very few plants have true blue blooms, as plants cannot produce blue pigment and only generate the color by chemically altering existing pigments. This can be achieved by modifying pH, as with hydrangeas, where blue flowers are produced only on acidic soils. Their rarity makes blue flowers noteworthy and two handsome examples are currently stealing the show here.

Portuguese squills (Scilla peruviana) are bulbous plants from southeastern Europe and North Africa. Quite at home in our Blue & Yellow Border, each plant produces a magnificent spike richly endowed with numerous flowers. The purple petals surround conspicuous blue stamens and ovaries in the center of each flower. The outermost buds open first, surrounding a dense cone of deep purple buds. The sharp-eyed among you may have noticed that the Latin name of this plant doesn’t match its geographical origins. Apparently, Swedish taxonomist Linnaeus believed the plants hailed from Peru, when in reality they had been transported aboard a ship called Peru.

For an even purer blue, it’s hard to beat gentians, and several are shining in our Back Garden gravel border. We tend to think that all gentians have blue flowers—perhaps because gentian blue is such a well-known color—but most Andean gentians have red flowers, while white predominates in New Zealand species. With sunny weather forecast this weekend, it’s the perfect time to visit and marvel at these miracles of nature. You certainly won’t leave feeling blue! And don’t forget, our Plant Sale runs Saturday and Sunday with many beautiful blooms on sale, including a few blues.