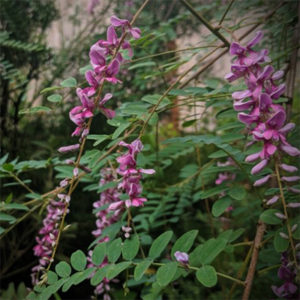 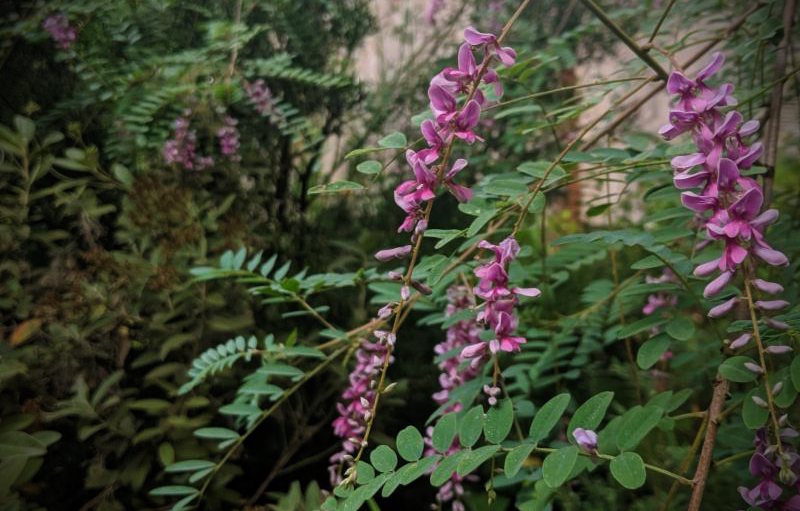 Indigofera pendula, collected as seed in 1996 in Yunnan Province

Some plants have such a long history of use that we can’t rightly say where on this planet they first sprang forth. They have been harvested, cultivated, and distributed by enterprising humans for so many thousands of years that scientists have just thrown up their hands and given up trying to track them back to their place of origin. I love those plants and their stories, because they show that we’ve always been gardeners, and that we’ve always found partners in the plant kingdom to help us make a home, feed each other, or, in this case, add more beauty to our world.

If you walk along the eastern rock wall beds at Heronswood you’ll see a graceful, multi-stemmed shrub with pendulous chains of pink, pea-like flowers just coming into bloom. This plant, Indigofera pendula, is closely related to one of the only sources of true indigo dye, Indigofera tinctoria. Other species in the genus, and some species in other genera entirely (some Polygonatum and Strobilanthes, for example) are sources of that rare blue color as well, but Indigofera tinctoria is the most well-known and reliable, and likely has the longest relationship with humans. A recent archaeological dig in Peru uncovered cotton fabric dyed with Indigofera that dated back to over 6,000 years ago.

Unlike Indigofera tinctoria, we do know with certainty, to the exact spot, where our own Indigofera pendula originated. It was collected in 1996 by Heronswood’s Director, Dan Hinkley, in Yunnan Province in China. Though it never gained the fame of its cousin, it deserves to be celebrated in its own right. Its arching, multi-stemmed habit, combined with the sweep of its hanging racemes of flowers give it a unique architecture in the sunny border, particularly when it’s in full bloom, as it is now. We don’t cut it back hard in the winter as you might another Indigofera, as we’re at the edge of its hardiness zone and would hate to sacrifice any of those flowers. The charm and versatility of this genus in the garden merit a renewed commitment on our part to this historic partnership that we have with Indigofera, for the sake of adding a little beauty to our world.