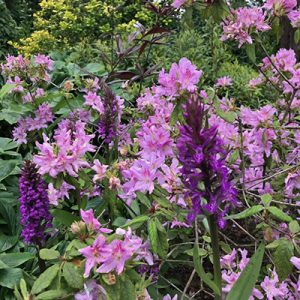 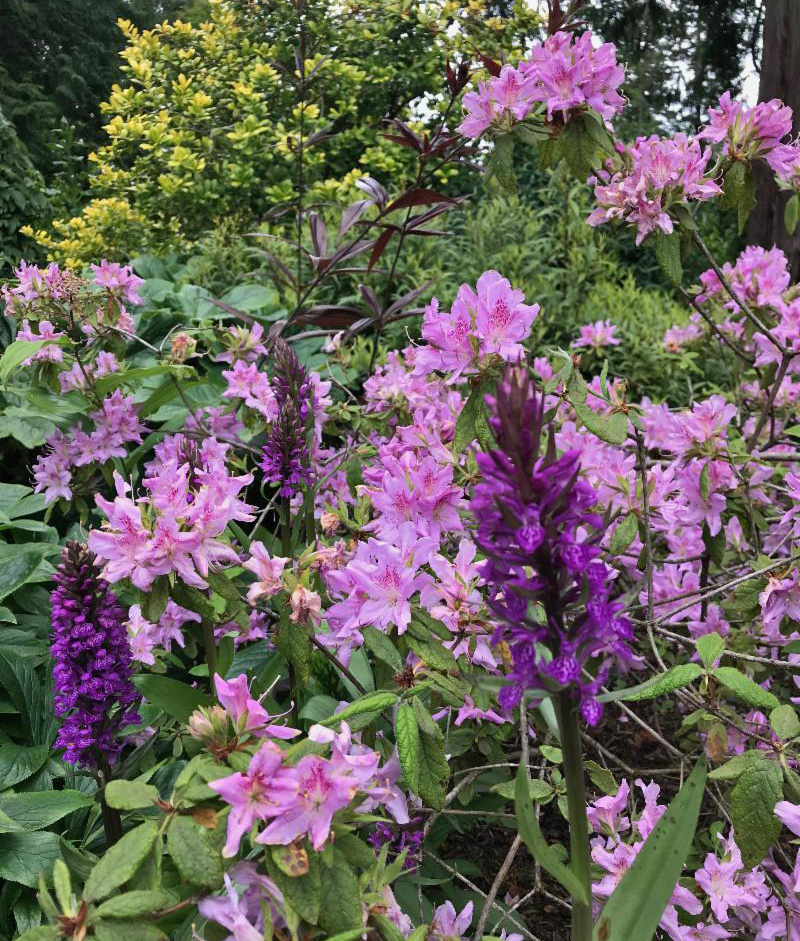 Seedlngs of Dactylorhiza with Rhododendron macrosepalum

A taste of the tropics

Orchid flowers evoke exotic locations – tropical trees bedecked with these glamorous blooms, standing above palm-lined beaches, a waiter brings a cocktail… While most orchids are indeed native to the tropics, a small number make their homes in cooler climes. Spotted orchids, in the genus Dactylorhiza, are extremely hardy and there are many in bloom now around Heronswood. Look out for their colourful cones of pink, purple or white blossoms, often with delicate spotting. Peek down at the foliage, too, as it can rival adolescents with acne for spotting, though in a more pleasing way.

Dactylorhiza is a bit of a tongue-twister. This Latin name actually derives from Greek and refers to the underground tubers, which have multiple finger-like lobes and thus resemble human hands. Well, they do with a bit of imagination! Spotted orchids thrive in humus-rich soils with adequate moisture and are often found growing wild in areas with damp soil, thus the alternative name ‘marsh orchids’. Hailing from Europe and northern Asia (and just sneaking across the Bering Strait into Alaska), many dactylorhizas in cultivation are vigorous selections that thrive in a range of conditions; in short, they’re the perfect choice for the newbie orchid grower.

You may notice that few of our spotted orchids are labelled and this is because these plants are somewhat shameless when it comes to reproduction. Different species interbreed with reckless abandon, scattering their dust-like seeds around the garden. Progeny pop up unexpectedly, often revealing a mixture of parental features. This taxonomist is not ashamed to admit that documenting the dactylorhizas at Heronswood will be one of his biggest challenges.