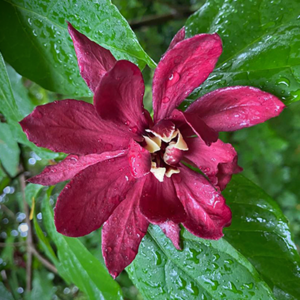 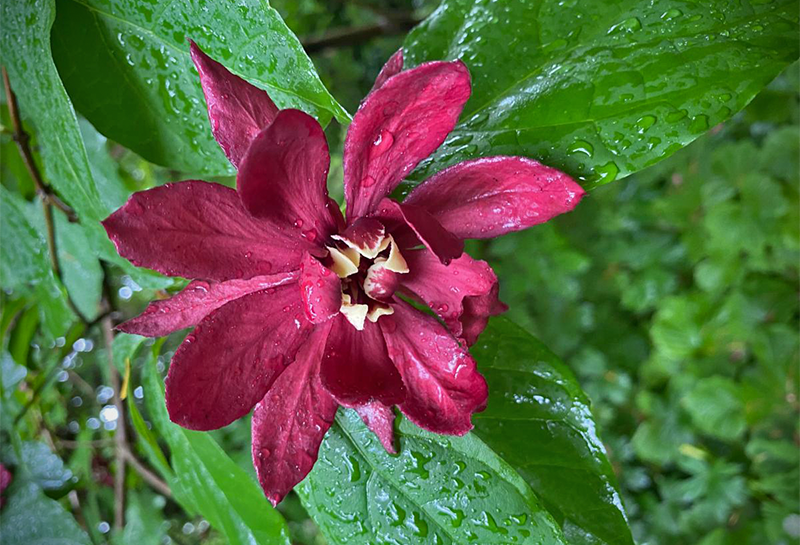 At a time of the year in the gardens of Heronswood when all eyes are focused on, and noses trained to, the astounding, skyrocketing, flowering stems of the magnificent, if not narcissistic, Himalayan Lilies, Cardiocrinum giganteum, the immense remainder of our rarified collection in peak blossom seems to get short shrift. So, during your visit this weekend, hopefully while bringing Pops and Grandad along for an entertaining day’s outing (free entry for them on Father’s Day!), I will remind you to look beneath and beyond these “eco-centric” wonders to see the ample amounts of magic happening elsewhere in the garden.

In our woodland garden grows two species of deciduous shrubs in the genus Calycanthus. Caly (beautiful) anthus (flower) is an apposite name for a very small genus of only three or four species from North America and Asia in an equally small plant family, the Calycanthaceae. Collectively they are commonly called Sweetshrubs for their ripe fruity scent (not readily apparent in the cooled maritime temperatures of the Pacific Northwest). The flowers of each species are superficially similar to one another and might best be described as having the gestalt of a small Magnolia carried on multi-stemmed shrubs to 10′ x 10′.

In the northern woodland, Calycanthus brockianus breaks from the North American norm by possessing greenish yellow flowers with a slight fruity scent when higher ambient air temperatures allow. From the Southeast hails Calycanthus floridus, that shares with the California’s Calycanthus occidentalis startling flowers of deepest burgundy. Prior to the mid-1990’s, use of the Sweetshrubs never gained a foothold in Pacific Northwest gardens, probably due to their large size and obdurate inability to behave sweetly. But all of that was about to change.

In 1963, a new species of Calycanthus was discovered in a very narrow geographical band in China’s southeastern Zhejiang Province. With large white, almost gardenia-like flowers (sadly, without fragrance), this new Chinese counterpart to the known American species would rewrite the ornamental potential of the genus as we understood it. 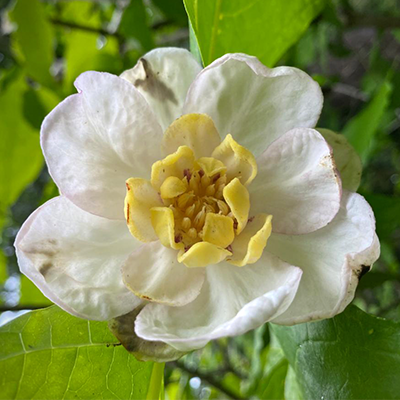 Crosses between Calycanthus floridus and the new Chinese species were first made at the North Carolina State University Arboretum under the direction of J.C. Raulston. Later, this novel hybrid would be given the name of Calycanthus x raulstonii to honor him and his efforts on behalf of the American horticultural community. It is this hybrid, Calycanthus x raulstonii “Hartlege Wine” that is in full blossom this week, with very large flowers deeply saturated in clarets and burgundies. It is imperative that all visitors seek this out for ample admiration. Not far away is blossoming its parent of Chinese origin, C. chinensis, and too should be observed, at least by our botanically curious guests. Ask any of our staff in passing where these grow!

The garden abounds with color this week, with the summer perennials slowly and assuredly taking control of the visual engine that drives the garden. With our decidedly long and luscious spring, this weekend, at least, you will get to see both confidently at the helm, including the beguiling members of the genus Calycanthus. We hope to see you.