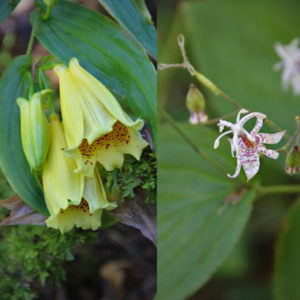 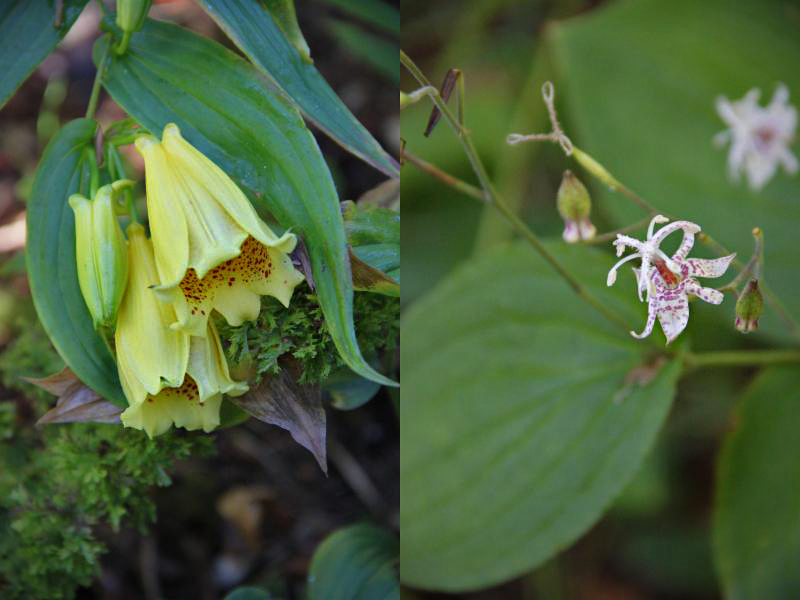 Toad lilies, warts and all

Amongst the panoply of excellent fall-flowering perennials, toad lilies
(Tricyrtis) occupy a special place in my heart. When I first encountered them as a child, I was convinced that the flower buds resembled rocket ships. Look at one closely and you’ll see it’s cylindrical, with a pointed apex and three ‘feet’ at the base. Each one appears poised to launch itself into space and indeed a mass of toad lilies does give the impression of a fireworks display. You’ll find several different Tricyrtis varieties in our Woodland Garden, all at their peak now.

The twenty or so species of toad lily are all native to Asia and have much to offer the gardener. Their principal attraction is their intricate flowers, each with six white or yellow tepals, often generously mottled with purple [in flowers where sepals and petals look similar, we refer to them all as tepals]. The three outer tepals each have a swollen nectary at their base, forming the ‘feet’ of the rocket. The inner three tepals have protruding crests that arch over the central stamens. With their somewhat complex structure, toad lily flowers warrant close inspection. In species such as Tricyrtis maculata, the flowers are star-like and face upwards, while in others such as T. macranthopsis, they are bell-shaped and pendulous.

Flowers are not their only attraction. The ribbed leaves may be glossy or hairy and in some forms, are heavily marked with spots or variegation. Toad lilies need some shade and will even tolerate dry shade, though they prefer a rich, moisture retentive soil, so pile on the mulch. They pair well with hostas, ferns and other woodland perennial and are readily propagated by division.

So, what’s the amphibian connection? Probably nothing more than the spotted flowers. Toads share with Tricyrtis a fondness for damp shade, plus their skin is often covered in spots. Certainly, there’s no truth in the old tale that hunters in the Philippines smeared their hands in toad lily extract when out hunting frogs. The Latin name Tricyrtis means ‘three-humped’, referring to the ‘rocket feet’ on the flower buds. Toad lilies are putting on quite a show right now, so come along to Heronswood and make the most of this toad-tally frog-tastic display! [groan]