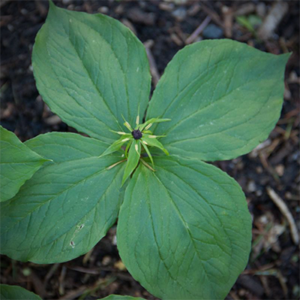 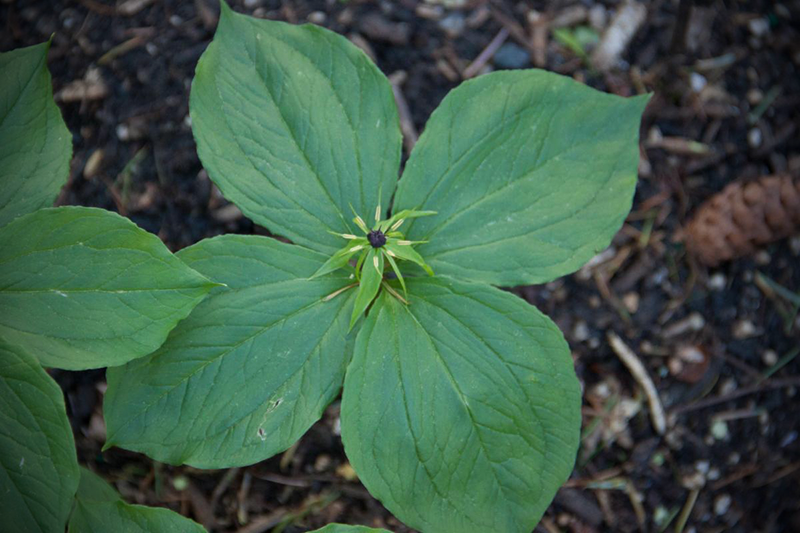 The word “quarantine” has been around for centuries, but now joins our current lexicon of coronavirus catchphrases: social distancing, flattening the curve, new normal, PPE, home schooling (should that be hyphenated? Not sure, ask the kids). Its origins trace back to when the Black Death stalked mediaeval Europe, though the practice itself is much older. When ships entered the port of Venice, they were required to wait 40 days before disembarking. The Italian word for forty is quaranta, itself derived from Latin quattuor meaning four. Quarantine is one of many words of similar origin; just think quarter, quadruped or quadruplet.

You’ll find them in the garden, too, as in the above Paris quadrifolia, each stem of which typically has four leaves (though fives are not uncommon). Paris belongs to the same family as Trillium, another name of numerical origin. The floral parts of all trilliums are in threes: 3 sepals, 3 petals, two sets of 3 stamens, 3 carpels. In Paris, however, there is much variety and four is at the lower end of the scale. Indeed, no Paris has is parts in threes, twos or ones, though they can have floral parts of ten or more. As the trilliums begin to fade in Heronswood’s Woodland Garden, the various Paris take over. Some are in full bloom now, but others wait until summer to shine.

Though perhaps less colorful than Trillium, Paris flowers are curious and marvelous. The petals are greatly reduced, almost thread-like, giving the blooms a spider-like quality. The colors are subtle, muted, often green (my favorite!), though there are exceptions. Sultry Paris delavayi delves into a deep purplish brown, and the ovaries of many species can be especially vivid, often pink. Floral ovaries rarely stun the observer, but in Paris they steal the show. As with Trillium, these plants prefer the shade, reliable moisture and a soil rich in humus.

We began by contemplating on quarantine and, if you’re stuck at home, try searching for the numbers in plant names. For those whose Latin is a bit rusty, here are the basics: unum (1), duo (2), tres (3), quattuor (4), quinque (5), sex (6), septem (7), octo (8), novem (9) and decem (10). And a word to the wise, botanists often incorporate Greek into plant names, so for any quadrophiles, look out for tetra, as in Tetracentron and Microcachrys tetragona. Happy hunting!