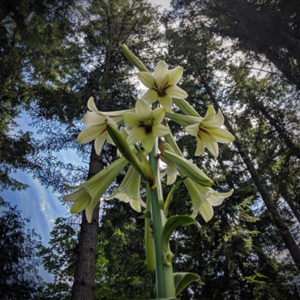 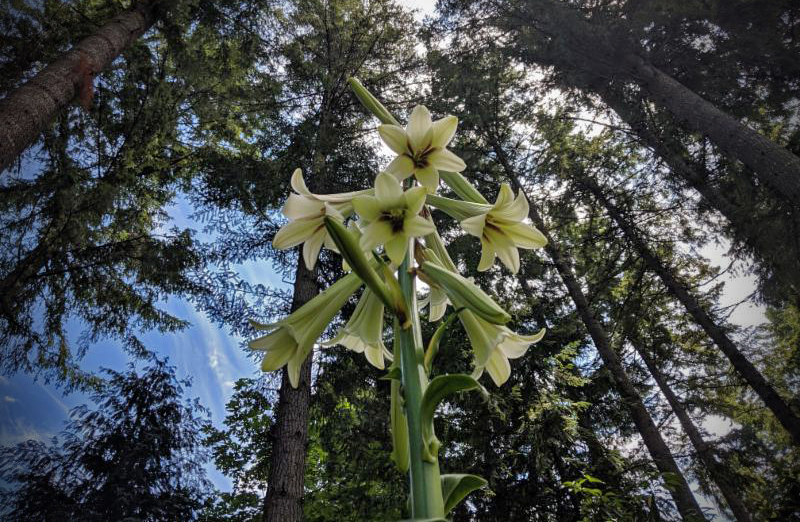 A woodland perennial with four season interest is a rare thing, but species in the genus Cardiocrinum come close. Rosettes of glossy, heart-shaped leaves tease us with promises of skyscraper-like blooms for years. New flowering stalks add a graceful, upright architecture to the woodland understory, not to mention a tantalizing, lily-like fragrance (they are in the Liliaceae family, after all). And if that wasn’t enough reason to grow them, the dramatic seedheads stand tall throughout the fall and winter, extending the show into quieter seasons.

It is probably safe to say that Cardiocrinum are among our most popular plants at Heronswood, and with good reason. They are true show-stoppers. We point them out on every tour, in their various stages of development, encouraging visitors to come back in mid-June when they are in their full glory. We are at the tail end of peak bloom for Cardiocrinum giganteum var. yunnanense, but it’s slightly less giant cousin, Cardiocrinum giganteum, is just beginning.

C. giganteum is almost identical to other Cardiocrinum prior to flowering but is distinct from var. yunnanense by its lack of a dark purple stem, and less of the pronounced, deep purple tint inside each lily-like flower. Each can send up flower stalks that reach well over 12’, but we have noticed that C. giganteum are ever-so-slightly shorter than var. yunnanense, and C. cordatum, yet another species in the genus, is much shorter still at under 5’ in height. All Cardiocrinum are native to cool woodland understories in eastern Asia. Give any one of them dappled light and a rich soil and they will reward you generously.

One trait that all members of this genus share is that they are semi-monocarpic. A true monocarpic plant is one that exhausts all of its energy and dies after flowering (think bamboo). The gigantic flower stalks of Cardiocrinum do drain all of the energy stored in its lily-like bulb, and it can take roughly seven years for them to flower from seed, but they have a trick up their sleeve. At the base of each spent bulb can be found up to half a dozen small, clonal offshoots. We dig these up each fall and distribute them around the garden to ensure a steady show of these wonders for years to come.