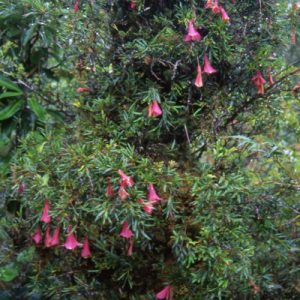 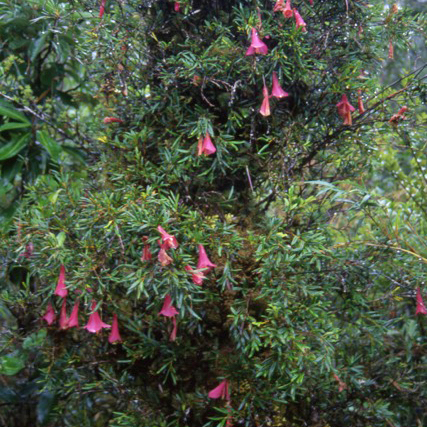 In Situ photograph of Philesia magellanica near Puerto Montt, Chlile, in 1998

During my first tour of S. Chile in 1998, there was a single shrub I wished to see more than any other. Related to the national flower of Chile, Lapageria rosea, Philesia magellanica is less a climber and more an advantageous scrambler. All in all, it has equally splendid pendulous bells ranging from near white to rich cerise.

Though we encountered its more highly celebrated cousin Lapageria, on numerous occasions, Philesia was a holdout until the very last hours of the very last day. I had hiked for a considerable distance along a raging river in the Alerce Andina National Park/ As if to say, “hey stupid, take a look at what you’re passing by”, a hiker in front of me had picked its unmistakable flower and dropped in dead center of the path. Indeed, the trees in the shadows of the moist and boggy area through which I was hiking were copiously clad in this most remarkable and beautiful plant in full flower.

Though successful germination of its seed occurred in the spring of 1998, the resulting seedlings went no where fast. Thinking they indeed wanted their feet in perpetually moist soils, this is precisely where it was planted in several locations throughout Heronswood. Finally, last year, we lifted the one surviving plant from the upper bog to the much drier bog margin. Not only is it thriving, but flowering. Its floral display this year is not going to necessarily have you lusting over this species for your garden. Not yet, that is……

Our single, rich rose/red, 2.5″ bell flower is itself about a quarter size of our entire plant. But to have this at last blossom, how effortlessly it transports me back to that February day two decades ago, when I at last saw the shrub I most wanted to see and, no less, in full flower.

Come this Friday and/or Saturday, and we will steathily show you our specimen, presenting its first flower and now, hopefully, many more to come in the future.