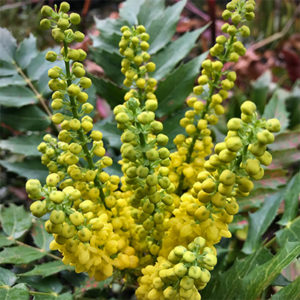 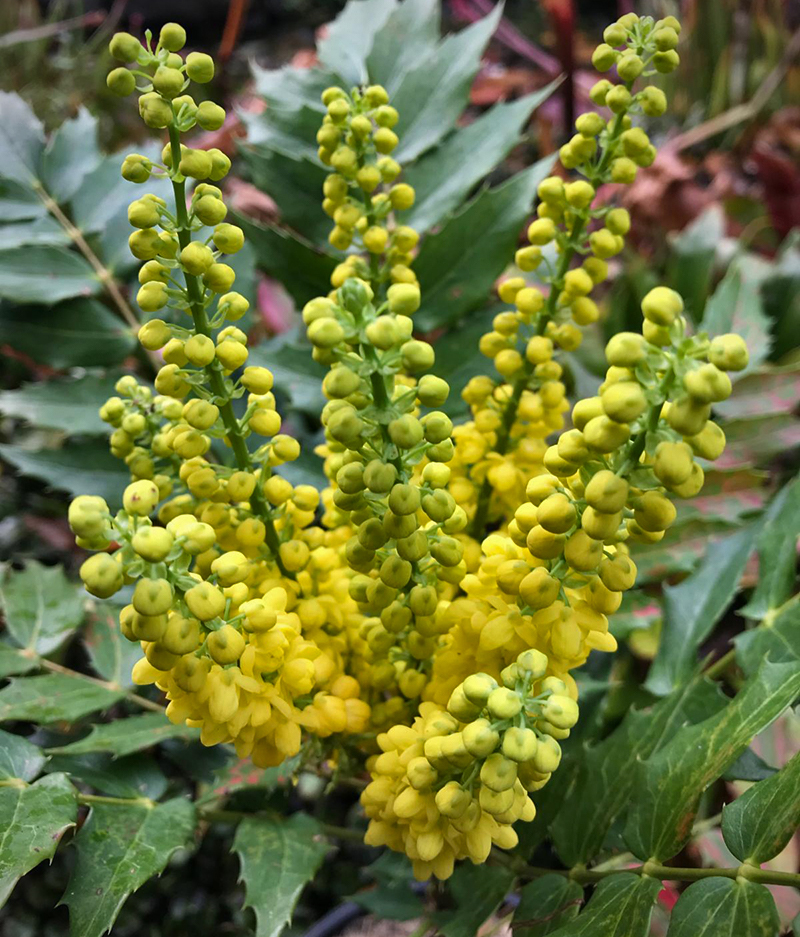 A hybrid from Mahonia oiwakensis parentage raised from seed at Hereonswood

A Season of Giving

It remains a pity that so many of the treasures found in our collection at Heronswood come into their finest after the garden has closed for the year. Of those that shine brightest in mid-November through February, and continue the giving well into late spring, there is no genus of plants more generous than the Mahonias, in particular, the Mahonia species from Asia and the many hybrids based upon them.

Just as we are closing shop and putting the beds to rest, the highly packed and generally erect racemes of rich yellow, nectar-rich flowers of a heady inventory of the so-called Oregon Grapes begin their detonation throughout the garden. On warmer sunny days, honey bees swarm to these flowers that can be quite sweet in fragrance. But even on frigid mornings, Annas Hummingbirds and Townsend Warblers can be found feasting from the flowers, a reliable source of food for our feathered friends during Arctic outbreaks.

Depending on when the flowers have opened, as early as November but as late as April, magnificent crops of rich blue berries are produced from the pollinated flowers. These too feed hungry migrating or resident birds. The later ripening Mahonias are in fact here and ready for returning Bohemian Waxwings who rely on this earliest of ripening fruit to sustain them until Indian Plums and Salmonberry have readied their crops.

It goes without saying that with so many species and hybrids in our inventory along with so many eager pollinators, resulting seedlings raised in our garden represent a grab-bag of genetics. How entertaining it has been to nuture many of these hybrids to maturity and observe them for attributes that might deem them candidates for greater recognition in gardens in the Pacific Northwest.

On this eve of our national day of Thanksgiving, the entire staff of Heronswood wish you a satisfying day with family and friends. We remain grateful for your continued support as Heronswood continues to grow in the future.