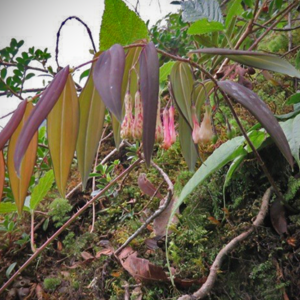 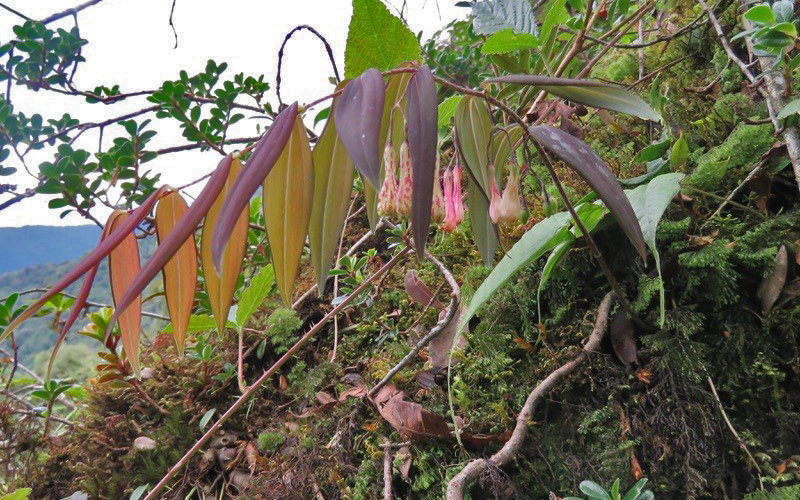 Autumn-blooming Solomon’s seal (Polygonatum autumnale) in habitat in India; Heronswood has the only plant in North America.

It was early on in my formative years that I became infatuated with what was then referred to as ‘woodland lilies’. Under the umbrella of the lily family, a rather good assemblage of numerous genera began to take shape in our woodland garden, including Disporum, Streptopus, Uvularia, Maianthemum, Disporopsis and the subject at hand, Polygonatum. If that seems to you simply a bunch of Latin, understand that for me it was, during this time of introduction to their breadths of diversity, all Greek. Over several years, the more I traveled, the greater comfort level I began to possess in sorting the many look-alikes apart from one another.

The many species in the genus Polygonatum are collectively and commonly known as the Solomon’s Seals, and it is the architecture and plumbing of their underground bits and pieces that give rise to both its scientific and common names. The signature rhizomes of this genus produce a network of multiply-segmented knobs; this feature gives rise to the Latin moniker, Poly many – gony knees. Furthermore, if one slices through a beefy rhizome of some species, what is revealed is a pattern that superficially resembles, if ample imagination is used, a Hebrew character, accordingly Solomon’s Seal.

Despite the fact that I have consistently used this subterranean feature to confirm their identities while in their natural haunts, polygonatums are in truth all about the sublime qualities of their foliage, flowers and diverse textures they offer to the well-appointed woodland garden. Magnificently graceful is an apt superlative when describing arching stems clad with leaves of variable finish; satin, high gloss or burnished copper. Yet it is by gently lifting their stems and admiring the pendent bells that fall in double rows along the entire length that the magic of this genus is fully revealed.

Taxonomically speaking (Mom, do we have to?), the Solomon’s Seals are now placed in the Asparagus Family where about 75 species take residency, all from the northern Hemisphere. As only two of those occur in North America, (Polygonatum biflorum and P. pubescens), and only three in Europe (P. multiflorum, P. odoratum and P. verticillatum) the lion’s share of species (and diversity!!!) are left to be claimed by Asia.

I recall a particularly memorable Solomon Seal day in northern Vietnam in 1999 when camped with Bleddyn and Sue Wynn-Jones on a heavily forested mountainside. Bleddyn and I had ventured out on our own that day, both searching (yes, competitively) for the same plant, the rarely seen Polygonatum mengtzense, virtually unknown in cultivation. As we both sheepishly returned to camp empty-handed that evening, Sue proudly showed us her own collection of that day, that of our quarry growing in a tree slightly above the campfire we had left behind that morning. Seedlings from that very collection, with evergreen foliage emerging in spring with arresting tones of glistening purple, are quite content growing on ground plane in several areas of the woodland at Heronswood.

Appositely, a day in 1996 in northwest Yunnan Province in China informed me of the ultimate size members of the genus can achieve. I will never quite forget my glee in measuring the full 17’ of Polygonatum fuscum, clad with narrow foliage bleached by frost, each leaf tip terminating in a curled tendril allowing for an easier climb, and clusters of large, succulent red fruit still attached at each leaf axil. This too has long ago settled into Heronswood, growing in the Arbor Beds south of the Garden House, planted at the base of a small tree to replicate its natural inclinations. Its stems twine upwards vigorously for us however never quite as long as that fish I caught years ago.

Throughout the garden this season, in a spring unlike any I can recall in terms of an almost surreal lushness in direct proportions to our collective need of lushness, you will discover a fascinating beguilement of polygonatums amidst our delightfully complex springtime jumble. In foliage, flower, fruit and form, you will discover a genus worth getting to know. I hope you fall as madly in love as I did years ago. Allow us to introduce you.