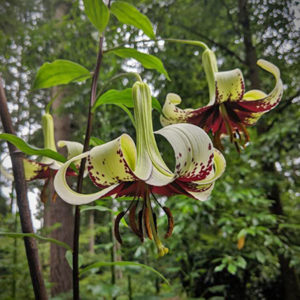 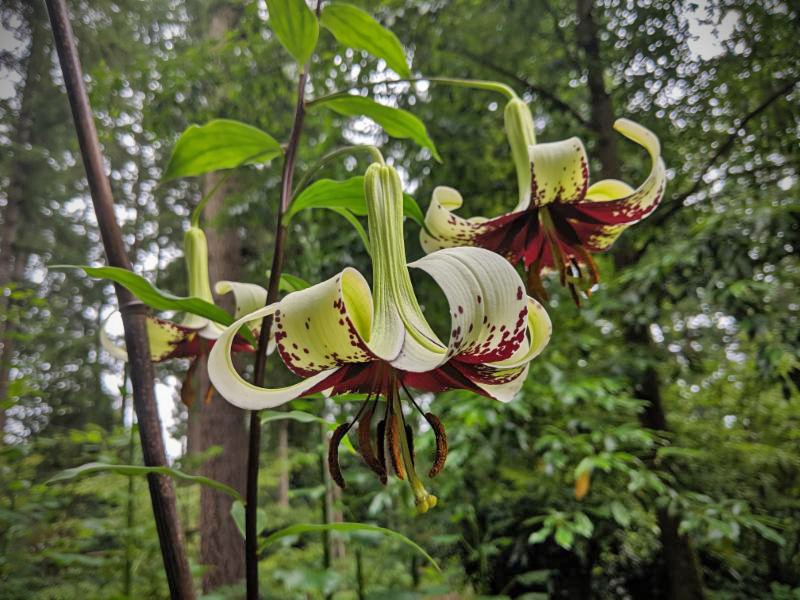 Lilium primulinum var. ochraceum blooming in the woodland at Heronswood

A Wealth of Mid-Summer Lilies

Besides those cheery, early-blooming Lilium martagon, which have already come and gone, we’re entering a peak lily moment this very week at Heronswood. It seems appropriate that we’ve once again passed through a (very welcome) period of rain and gloom, and the lilies are out with the sun as if to say that summer has well and truly arrived.

One of my favorite things about being a gardener is that our education is never done. As soon as I feel that I have a good grasp on a group of plants, I lean in just a little bit closer and find that they are further subdivided into categories, based on our best attempts to sort the natural world into neat boxes. Depending on who you ask, the genus Lilium is grouped into anywhere from seven to eleven such boxes, called sections if we’re discussing only species, or nine boxes, called divisions if we’re discussing garden hybrids.

For now I’m content to appreciate the differences in the species that we have here at Heronswood, and to see what they can tell me about their respective groups. One particularly eye-catching species in the north end of our woodland is Lilium primulinum var. ochraceum (sect. Nepalensia), a very tall, elegant, upright plant with large, downward-facing flowers speckled deep maroon in their centers. Compare those flowers to another tall species, L. michiganense (sect. Pseudolirium), the Michigan lily, deeper in the woodland and you’ll see why they’ve been placed into different groups. L. michiganense, as its name suggests, is native to central North America, and has bright orange tepals that are dramatically reflexed to the point where the tips almost touch one another at the base of the flower, much like that other North American native, L. superbum, or Turk’s Cap lily.

I could go on, promising you the deep, trumpet-shaped flowers of L. sargentiae (sect. Regalia) and L. philippinense (sect. Leucolirion), or point out the similar flower shape and inflorescence structure of L. duchartrei and L. tsingtauense, both blooming now and both in section Martagon. Instead I’d like to invite you to come to the garden this weekend and take a closer look at these plants for yourself, appreciate their fragrance, and see what they can tell you about their history, sections or no. I’ll be out there, too, doing my best to continue to learn.