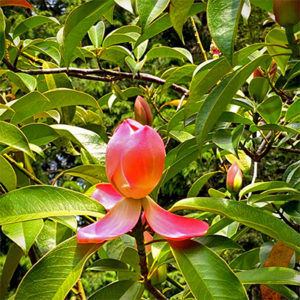 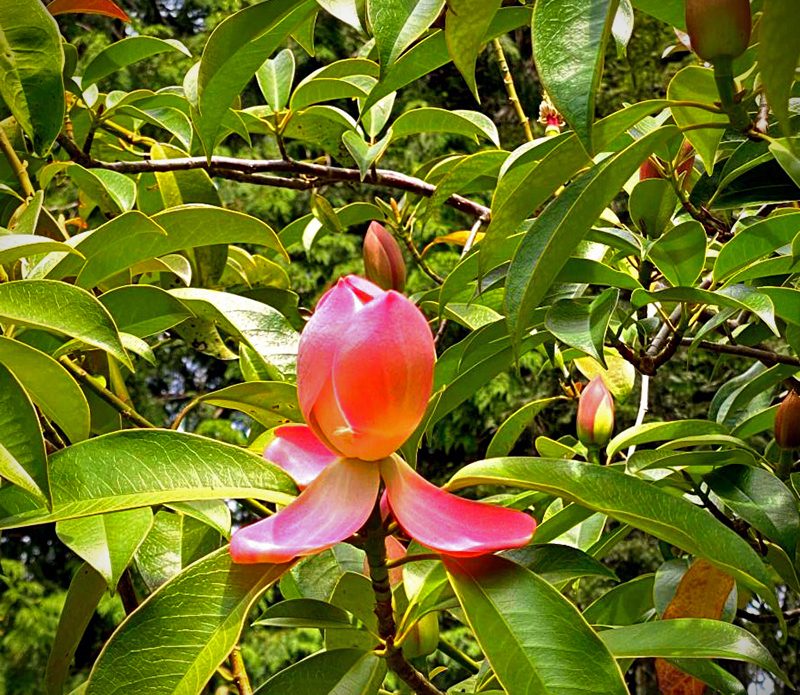 A very good form of Magnolia insignis from northern Vietnam offering its inaugural flowers at Heronswood.

From the Mountains of Vietnam to Kitsap Peninsula

The mild climate of the maritime Pacific Northwest provides ideal growing conditions for a significant assemblage of species in the genus Magnolia. Heronswood Garden boasts a respectable- and growing- collection, both deciduous and evergreen, representing hybrids as well as species from seed-collected progeny of wild origin. Here, as well as across much of North America, Magnolias in full blossom are emblematic of spring and early summer in our gardens.

As many of us were taught in elementary botany, Magnolias are considered ancient flowering plants known to have existed for at least 20 million years. I can still remember my excitement as a young lad in seeing my first Magnolia x soulangeana nineteen million years ago. Evolving before bees, the flowers of the earliest known species are thought to have been beetle pollinated.

Because, generally speaking, the flowers of Magnolias are so large, they provide easy study of flower parts. Their plump buds are protected by bracts which fall away like the cowlings of spaceship as the tepals of the flowers expand. Note tepals. Botanists would absolutely shudder should you call them petals as, in truth, Magnolias have what are known as an undifferentiated perianth; the sepals and petals appear the same. Borrrrinnng. However once you get into the sexology of the flowers, your interest might very well pique.

Most Magnolia flowers open twice. During the first opening, their flowers are sexually active males with concentric rings of many stamens shedding pollen before closing for the evening.The following day, the stamens have been honorably discharged and the flowers are receptively female.

It was in Vietnam in 1999 that I had my first introductions to Magnolia insignis, whose specific epithet denotes the noble aspects of its floral effects. It is quite common on the slopes of that region’s highest mountain, Fan Xi Phan, though it is quite widespread in its natural distribution, from Nepal through Burma and Western China. Historically, the best forms of this species are those collected by George Forrest in northern Myanmar in 1925. Having not seen those in flower, I cannot comment on how they compare to the lovely deep pink flowers on our newly flowering Heronswood specimen. It seems perfectly okay to me.