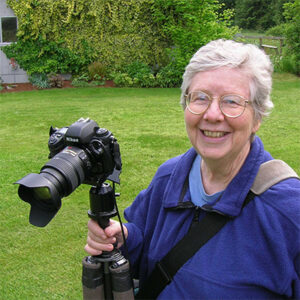 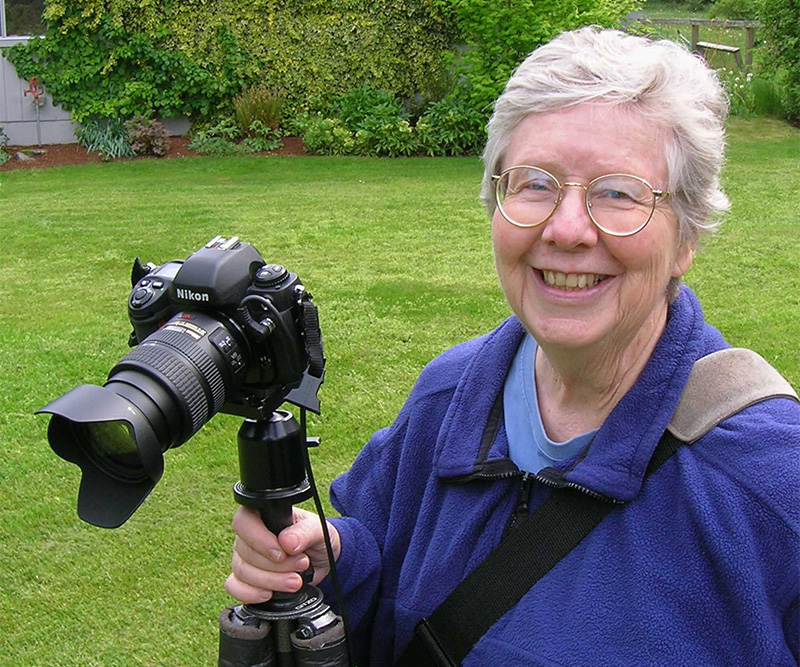 The Heronswood family lost a cherished friend on September 21st 2021 in the passing of passionate gardener, gifted photographer, friend and garden supporter, Lynne Harrison. Many of you knew her and nearly all of you would recognize her as the diminutive woman in a blue fleece, a pleasant smile, quiet demeanor and ever-present tripod.

Lynne was born on July 27th 1938 to Albert and Eleanor Davidson of Lafayette, California. A National Merit Scholar in high school, she continued on to Stanford University in 1960 where she received a Bachelor of Science in the very male-dominated field of Chemistry. For 62 years, she remained married to Dr Halstead Harrison, together living in Bonn, Germany, Ann Arbor, Michigan and then settling into the Pacific Northwest. They shared homes on both Mercer Island and Bainbridge Island.

Few realize that before Lynne devoted her photographic talents to capturing gardens and plants, she had become a celebrated portrait photographer in the 1960’s, using her understanding of chemistry in the dark room. Her portraits of Imogen Cunningham, Linus Pauling and the Dalai Lama have appeared in the New York Times amongst others, while her work can be found in the permanent collections of the Center for Creative Photography in Tucson, Arizona, the Oakland Art Museum and the Henry Art Gallery.

Lynne is survived by her husband Halstead, brother Tom Reynolds, three children and their spouses; Drayton Harrison of Seattle, Grace (and Joe) Hensley of Bainbridge Island, and Evan (and I-Kwoan) Harrison of Port Townsend, and her four grandchildren (Jack, Thomas, Oliver, and Annaleigh).

Lynne and I became acquainted early on within the horticultural community of the Pacific Northwest, through the many organizations of our region that continue to bring gardeners together. She began photographing the garden and individual plants at Heronswood in the late 1980’s, always respectful of other visitors while on the garden paths with her equipment. Perhaps her most significant contribution in terms of the Heronswood archives will be her documentation of the state of the garden after its sale to the Port Gamble S’Klallam Tribe and before renovation work had commenced. There is perhaps no one that could have attested to the degree of work that has been accomplished since 2012; her photographs will tell that story to Heronswood visitors in the decades to come.

On numerous levels, Lynne and I became fast friends. When it was time to write two books in the Explorer’s Garden series, there was no question who would join me as photographer. The success of these books has more to do with her artful capturing of any plant in its peak performance than the text. She was a perennial pleasure to work with, right up until only weeks before her passing.

That few of us realized her full body of extraordinary work and accomplishments says volumes as to who Lynne was as a confident and creative woman. Her humility, quietness and thoughtfulness are the traits all of us will remember and cherish, though her acute observations of the world around her made it clear the inner strength and confidence she possessed.

Coming upon Lynne in the garden, at an event or social occasion was much akin to seeing a sister that one admires. I am gladdened by the photographs she has amassed in her impressive archive, which will continue to be a touchstone presence in our lives. Thank you Lynne for all you have done for Heronswood and our collective horticultural community. We will miss you.