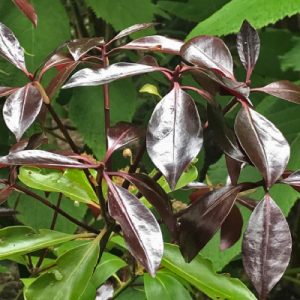 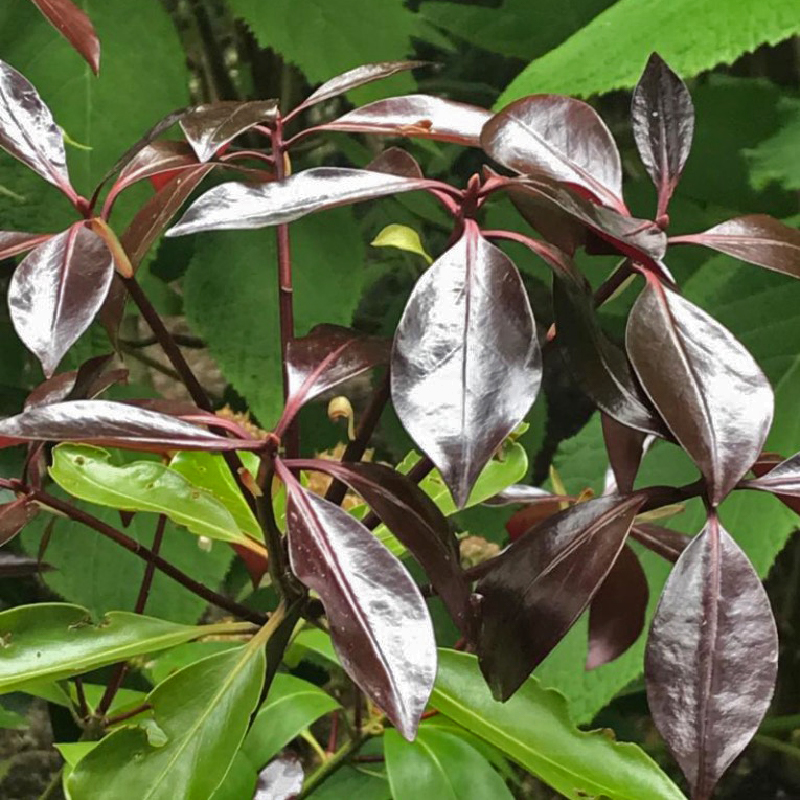 Good Foliage Amongst a Richness of Flower

Far more people are familiar with the genus Ilicium than the nerdy gardener. Authentic cuisine in SE Asia has long relied on sweet, spicy aroma of star anise, the star-shaped seed capsules of Illicium verum, which also supplies approximately 90% of the world’s supply of shikimic acid, a precursor in the synthesis of Tamiflu.

The genus of evergreen shrubs, native to both SE North America (including Mexico) as well as Asia, is not particularly large. The lion’s share of species are found naturally in China and adjoining countries. Taxonomists currently place the genus in either the Schisandraceae or its own family, the Illiciaceae.

Though we have a significant collection of the genus in the garden, including red-flowering Illicium henryi, Illicium simonsii with large creamy white flowers and the beguiling I. merrilianum with orange/pink blossoms, the genus also offers one of the most sensational shrubs we have in our collection in terms of folial interest.

Illicium anisatum is a medium sized evergreen shrub from Japan with glossy green foliage and cream-colored stars in late winter. For years, I lusted after a dark-purple-foliaged form of this species that is frequently encountered in specialty nurseries in Japan. Countless times, I paid a dear penny for this cultivar only to have it sulk and then ultimately perish after establishment in the garden.

A decade ago, I acquired another form in Japan, selected (I believed at the time) for its barely noticeable yellow blotching in the center of each leaf. Illicium anisatum ‘Variegatum’ would never set the world afire based solely on its meager folial variation. Unlike its near-black-purple counterpart, this import settled in quickly and began to gain stature. It was not until growth commenced on its second spring did I fully realize what this cultivar was truly about.

There is not a garden visitor that passes this shrub in summer growth that does not inquire of its identity. Its glistening black purple foliage remains enticing virtually all summer, ultimately fading to green centered with a quiet yellow marbling in autumn. The effect is more startling still when its white flowers appear in early May, in stark contrast to its ebony foliage.

As you explore the garden this Friday and Saturday, make note of not only the forms and functions of the countless plants in flower, but those that exhibit a greater length of season; those that possess lasting effects of foliage.