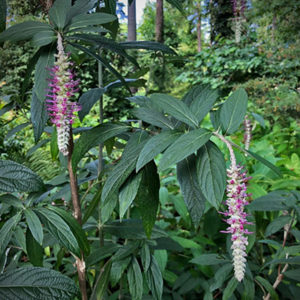 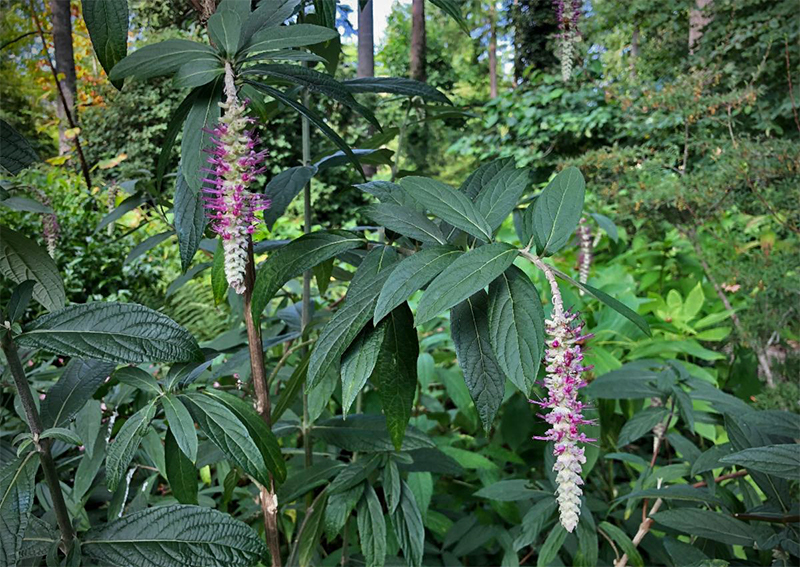 What attracts you to a plant? Beautiful flowers, pungent aromas, pleasing habit? For me, it’s novelty and weeping buddleja certainly has that. With silver-backed foliage and flaky bark, it resembles its namesake Buddleja davidii, but the flowers are presented in delicately drooping racemes, quite different to butterfly bush. It is not a close relation, either, residing instead in the sage family (Lamiaceae). Upon close inspection, the flowers are quite different. True buddleja blooms have tubular petals, but the petals of Rostrinucula are barely visible and it’s the emerging pink stamens that provide the color. They contrast perfectly with silvery-grey bracts, which protect the concealed blooms. In the Woodland Garden at Heronswood, our Rostrinucula is in peak bloom, so come and visit this weekend – perhaps like me you’ll fall under its spell?

Most buddlejas have finished flowering by now and it’s well worth removing the spent flowers, as some buddlejas, especially common B. davidii quickly escape the garden. This Chinese species has become a weed in many parts of the world, so should you choose to grow it, pick one of several sterile varieties that do not develop seed. Buddleja davidii does have its charms. It’s a magnet for butterflies and bees, and we should all support our local pollinator populations. Varieties with variegated or gold leaves bring extra color to borders. The genus Buddleja was named after an English vicar, the Reverend Adam Buddle, and from the start there has been confusion as to its spelling. Modern practice uses the letter ‘j’, but you’ll often see it spelled with an ‘i’ as Buddleia. Its classification has also been a source of confusion – currently placed in the figwort family (Scrophulariaceae), it has resided in its own family (Buddlejaceae) or the strychnine family (Loganiaceae). But enough about Buddleja – I don’t grow them.

Much more choice, weeping buddleja is not weedy, a fact for which I should be thankful, but I can’t help feeling that should some seedlings arise then I could find homes for them. For growers in warmer parts of the country, which perhaps mimic its native home in southwest China, this shrub is evergreen, but here at Heronswood, it sheds its leaves in winter. Flowering late in the season, its blooms can also be damaged by frost, so as cooler temperatures are on their way, visit now to see weeping buddleja at its blooming best!