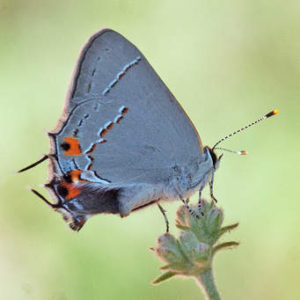 I consider myself a horticulturist, and in the grand scheme of classifying professions, this title falls under the umbrella of science. Saying the word “science” to many people might immediately prompt an image of a person in a white lab coat standing in a sterile room, holding aloft a small flask to examine the clear liquid inside it, but science at its core need not be so limiting.

Everyone can practice science, for the very first tenet defining it is observation. As children we’re innately prepared, watching the mannerisms of our parents and ultimately using our own senses to navigate the world around us. Our senses tell us that fire is hot, sirens are loud, and Brussels sprouts are yuck. Curiosity takes over and the relentless barrage of “why?” questions advance our parents’ graying hair. Calm redirection of this energy upon the natural world could encourage early development of a scientific mind as a child grasps at rocks, stares at birds and mammals, or smells a cluster of flowers.

Of the many organisms written that have captivated children throughout the ages, none other than the winged majesty of butterflies have received greater lines of prose, extolling their beauty, freedom, and transformation. A butterfly’s life cycle of metamorphosis is one of the most well told in science classrooms, and to further expand upon this for our region, we must understand some of their adaptive strategies to this environment.

Butterflies in western Washington, specifically the Kitsap and Olympic Peninsulas, can be scarce since being the ectothermic (cold-blooded) creatures they are, our climate of cold and wet is not conducive to their survival. To compensate, a species may overwinter in a life cycle stage through a process in insects called diapause, or a species can migrate to warmer climates as an adult. In spring many of the tiny butterflies taking advantage of the early flowers are often those who entered diapause as pupae or chrysalises.

Small, blue butterflies like the Western Tailed Blue (Cupido amyntula) or Silvery Blue (Glaucopsyche lygdamus) are from a larger group, the Gossamer Wing family (Lycaenidae), and a majority of these butterflies employ this strategy. Being already small on the wing, an observer is less likely to encounter the larvae during warmer seasons as they’re often camouflaged among their host plants as tiny, slug-like creatures or being attended by ants for the honeydew-like substance they may excrete. Many species in this family feed on legumes as caterpillars, but there are a few generalists who eat larger broadleaf plants like the Echo Azure (Celastrina echo) or the Gray Hairstreak (Strymon melinus).

Research into butterfly scales, particularly those colored iridescent blue and live in the tropics, has shown that their color is produced not by chemical pigmentation, but in the way light hits microscopic structures on the scale surface and is then refracted back to human vision as blue.

Two other early fliers from this family in our area are the Brown Elfin (Callophrys augustinus), another larval host plant generalist, and the Cedar Hairstreak (Callophrys gryneus), whose favorite caterpillar hosts include cedar and juniper. The subfamily of hairstreaks, with dainty tails extending off the hindwings, have an interesting habit of rubbing these wings together to distract predators, as a combination of wing markings and tails confuse one end for the other. Additionally male hairstreaks use this behavior to rub special pheromone glands to attract mates.

There are many more butterfly families to cover and I look forward to doing so next week in Part II of Local Butterflies of Early Spring. 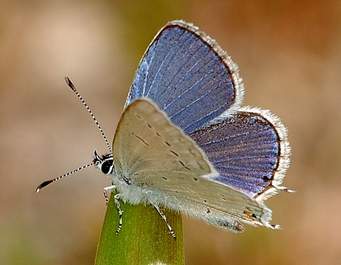 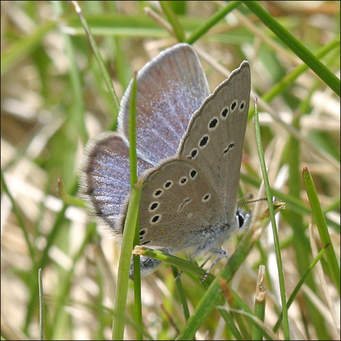 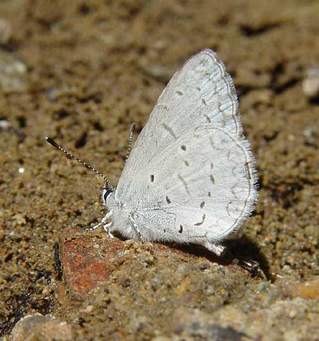 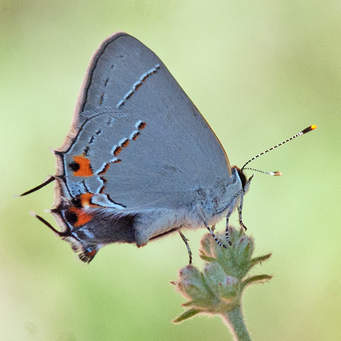 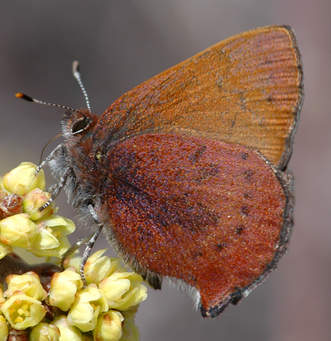 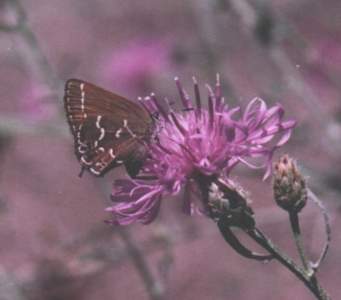