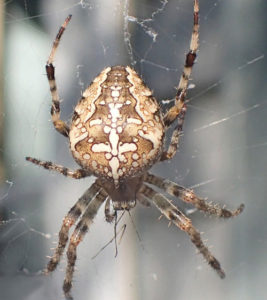 A WEB OF UNSEEN HAZARDS

There’s nothing quite like the sensation of escaping the harsh sunlight of a summer afternoon and retreating to the cool understory of a forest. Once sweaty skin is now soothingly cool, coupled with the sweet fragrance of fresh air within a woodsy grove. A couple steps forward turns relief into mortifying disgust as you try to swipe away the invisible threads of a spider web strewn across your face. The owner of this fine mess of a face trap is most likely somewhere in your hair or was lucky enough to avoid the chaos and retreated back to a nearby branch. This scenario has played out innumerable times on hiking trails the world over and will continue to do so in perpetuity. I’ve lost count of how many times this has happened to me, yet I still endorse each web’s placement and appreciate the services the spiders provide to people out on the trails.

The current season on the peninsula brings out the arachnid activity, and vertical webs are aplenty from our most common spinner, the cross orbweaver (Araneus diadematus). This is a widespread species of orbweaver that exists on many continents and countries in the northern hemisphere. A medium to large spider relative to the web it weaves, in our area its coloration is typically shaded with a base of brown to orange touched with highlights of caramel and cream. The spider’s enlarged abdomen has a distinct cross pattern displayed on the upper face near where it is joined to the cephalothorax. Legs are covered in short spines and darkly colored to match the shades of the abdomen. These spiders are large enough to catch medium sized butterflies and small dragonflies, and when not waiting at the center of their web, they are often found tucked under a leaf or nook to the upper left or right of the web.

Switching to the horizontal axis of orientation, a much smaller spider by comparison, the Sierra dome spider (Neriene litigiosa), is mercifully not going to be encountered face first. Placed among taller plants but rarely exceeding waist height, webs of this spider appear delicate yet intricate and without debris or light reflecting off of them, these are easy to miss. A large geodesic dome of threads up to nearly basketball size creates an outer frame, while at the center lies an upside-down hammock of sorts where the spider is often found centered with its belly facing the sky. The Sierra dome spider is not a large creature, as females reach the size of a few grains of rice with the male at roughly 2/3 her size. Female abdomens are D-shaped in a black and yellow pattern; a prominent mask face that resembles a Space Invaders’ alien is visible on top near the spinnerets. Given the size of the web and spider, these are adept at catching small flies, beetles, and moths. Truly the best time to find these spiders is during cool, misty mornings to observe the way water droplets are suspended from the threads, like viewing a map of constellations in a planetarium.

It is completely understandable that after having encountered a poorly placed web across a trail one might want to exact some kind of vengeance upon its creator. However, once the webbing is wiped clean and one’s composure returned, take a moment to consider the intention of the spider. The spider is wise to the organisms passing through, especially to catch the dozen or so flies and mosquitoes that may be following people navigating the forest. Understanding the benefit provided by these spiders’ passive mode of controlling insect pests might be best reciprocated by taking time to be observant and perhaps trying to duck or step over those webs that might otherwise have been a new skin accessory. 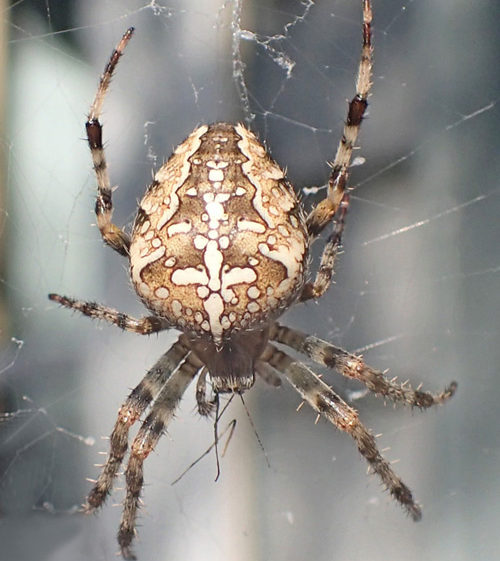 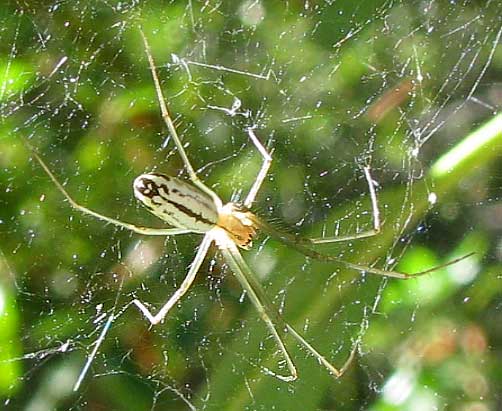