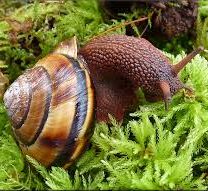 A SLIME OF PASSION

There is no shortage of plants at Heronswood to appreciate for one reason or another. Luscious camellia flowers bloom from winter into spring, shady beds of full hosta leaves cradle water droplets by summer, and come fall many plants display their last colors in preparation for dormancy. Unfortunately humans aren’t the only organisms who notice the botanical bounty in the garden.

On morning walks our staff occasionally sees leaves dangling by threads, or fruit and flower buds strewn across the ground with often a slimy chunk missing on one side. Evidence of the culprits’ escape can be traced as glistening trails disappear into darker, moister places. Our plant vandals are two groups of terrestrial gastropods, slugs and snails, and are the garden’s biggest predators of plants. Both are active primarily from dusk to dawn and they take advantage of the nights we are forced to irrigate beds in summer. They are unarmed but considered voracious and extremely slimy. Let us follow those slime trails and see who the likely suspects are in the lineup.

Heronswood staff members see a number of slugs especially on cooler mornings, and the most commonly seen are black slugs (Arion ater) and western dusky slugs (Arion subfuscus). Black slugs attain their namesake color when fully mature, but as immature slugs they can be various shades of brown or gray. Western dusky slugs are tan to dark brown in color, often with a dark band running along the middle of the body. Behind both of these slug’s mantles, that smooth area behind the head which contains reproductive and respiratory organs, their tails are covered in well-defined ridges and furrows. Interestingly, the mucus secreted by the black slug is so suitably slick that Swedes in the 18th century used it as a lubricant on wooden axles.

Two giant species by comparison to the last are the leopard slug (Limax maximus) and Pacific banana slug (Ariolimax columbianus). These two slugs look somewhat similar side-by-side as it relates to their base coloration of gray-brown to cream. However, to tell them apart requires just a look at the dark spotting patterns on the body. A leopard slug has small and numerous spots across the entire body, versus the larger spots on a Pacific banana slug distributed almost solely on the tail.

The final perp in the slug lineup goes by the alias, “taildropper” (Prophysaon andersoni), and does have the ability to amputate that part of its body. A dark line circles the middle of its mantle and typically this species is colored dark gray to tan. Its most distinguishing feature is the net-like coloring or venation on its tail; this pattern at a glance resembles fish or reptilian scales.

Leading the posse of snails at the garden is the garden snail (Cornu aspersum). Garden snails are lightly-colored gray to brown in their body with a cream-colored foot fringe. Their shell is caramel and brown- or black-banded with zigzagged blending of the two colors across the width of the shell’s spiral. It can be easily confused for another snail, the Pacific sideband (Monadenia fidelis). The sideband’s flesh is mahogany-colored to slightly red-orange, with a distinctly red-orange foot fringe. The shell is colored in rich dark browns and creams with a discernible black line that follows the outside curve of the shell’s spiral.

Our lineup now complete, let’s size up the suspects. While we may view all of these mollusks with disdain, the invasive snails and slugs have been found guilty as the main offenders. From the list above, the Pacific banana slug, taildropper slug, and Pacific sideband are endemic and have been set free on all charges. If you still feel worried for your plants and see one of the friendly locals cruising through your garden, please be kind and set them aside where they can wander off into the woods for a meal. 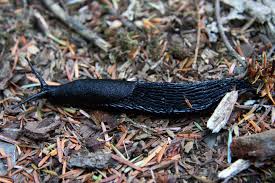 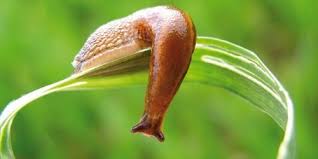 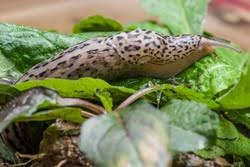 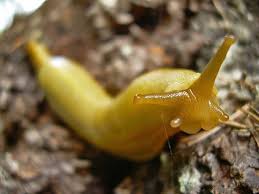 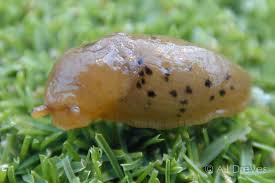 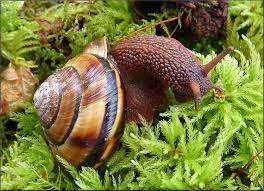