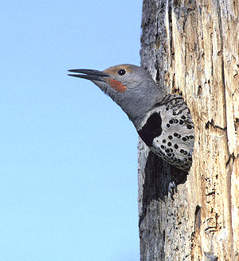 Art often imitates life, and when it comes to music, we have nature to thank for inspiration of delightful melodies. If the Pacific tree frog of which I waxed poetic in a previous article for its wondrous evening spring chorus, then to whom do we turn for the rhythm of these songs? Why, our resident members of the woodpecker family Picidae: woodpeckers, flickers, and sapsuckers!

The behavior of pecking at wood for these birds serves several purposes. Most apparent is that it is a method by which any member of this family can acquire food. Activity by beetle larvae feeding on interior tree tissues or ant colonies excavating corridors beneath the bark layer is audible to a woodpecker circling its way around a tree’s circumference. Once prey is located, the perfectly designed and chiseled beak hammers forth as the body, and not the head, distributes most of the impact. With the hole now cleared of wood, a long tongue both sticky and barbed grasps at an insect and brings it into the woodpecker’s mouth.

Sapsuckers, with a similarly designed tongue and wood pecking behavior, may also partake in insect feeding primarily during their breeding season; however, their main food source is from sap in live trees. Birches are often the trees sapsuckers seek out, but they are also known to feed from other deciduous and evergreen species.

Flickers have the broadest diet of this family, as they enjoy many different insects and arthropods, though if polled for a preference they’d likely hammer out ‘ANTS’ in Morse code. They also do not restrict themselves to the vertical feeding habits of their counterparts, are capable of snatching prey in flight, and will forage at or near ground level for a variety of berries and seeds.

Beaks of the Picidae are not only used for acquiring food, but also as a device for excavating a nesting cavity. Some species don’t limit themselves to one cavity over many years and will carve out a new home with each new mating season. Luckily this fickle behavior to our eyes is rather beneficial to other birds and mammals lacking such hollow-carving skills. Owls, squirrels, and other creatures make use of ‘last year’s model’ and raise their own young in these second-hand homes.

As alluded to earlier, the pecking behavior most frequently heard by humans serves as a way to court and establish territory. Each species performs varied lengths of drum rolls, beats, and cadence in much the same manner that songbirds have different notes and songs amongst their family members. Woodpeckers, sapsuckers, and flickers are also capable of song, but their vocal range is limited to a few notes of chattering, squeaks, honks, and sometimes wails.

The most boisterous Kitsap resident, the pileated woodpecker (Dryocopus pileatus), can often be heard through tracts of forest as they fly and land on perches in the upper canopy. As the largest woodpecker in North America, it’s no wonder when seeing an adult bird in profile I’ve heard it affectionately labeled as a modern day pterodactyl.

Moving down in size to the northern flicker (Colaptes auratus) brings with it higher pitches but still distinguishable calls commonly heard as squeaks in rapid succession or a sharp, quick ‘kee-ow’ repeated a few times. When disturbed they often fly just above an adult human’s height and are easily identified on the wing by the cream-white feathers above the tail.

Red-breasted sapsuckers (Sphyrapicus ruber) are preferential to the coastal evergreen woods of the Pacific Northwest and are distinguishable from other woodpeckers of our area by having a nearly entire red head. Their body is mostly black with a charcoal-gray checkerboard pattern on the back and chest.

Our final two regular residents are the downy woodpecker (Dryobates pubescens) and hairy woodpecker (Dryobates villosus). Both are remarkably similar in appearance, but the latter bird is larger in beak, body, and nesting cavity. In male birds, the identifying feature for both is the red bandana at the back half of the head upon a white body with black-and-white checkered wings. Either species is a common visitor to bird feeders, especially those providing a nutritious chunk of suet.

Keen birders wandering the forest may be able to see some of these birds in action as they flit about snags searching for food. For those without sharper sight you need only keep your ears open to hear the pleasant drumming of the woodpecker family echoing through the canopy boughs to know nature hasn’t lost its rhythm. 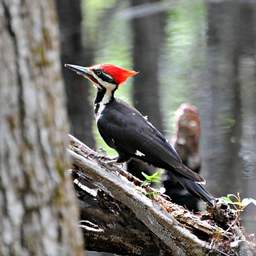 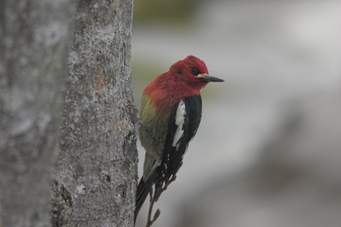 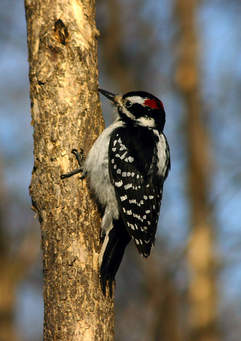 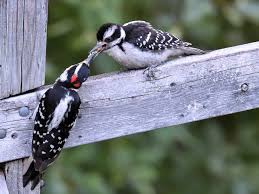