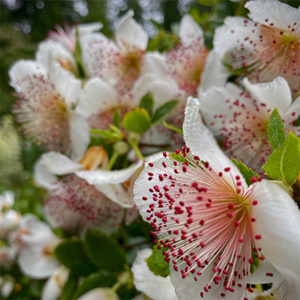 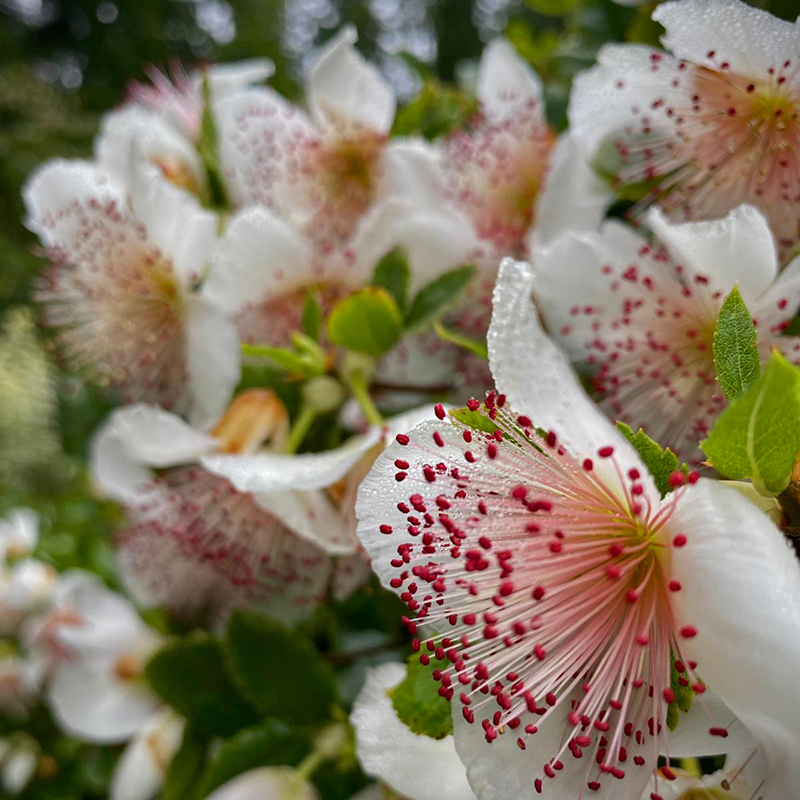 I have related the story so many times to so many people that I will assume you have already heard it before. But precisely when has that stopped me from telling it again? In the summer of 2004, while working on my degree at the Washington Park Arboretum, I stood up after inspecting the label of a maple at ground level to quite unexpectedly have an Eucryphia flower shouting right in my face. On that day, I decided and still believe today, the flowers of Eucryphia are the most beautiful in the world. Just try, little people, to disavow me of my belief.

And there is another story, entirely true which is a rarity from me, stemming from my first trip to Chile in 1998. Eucryphia cordifolia, the so called Ulmo or Elm by the Spanish colonists, was in full blossom during late February. A large evergreen tree to 70′, the southern forests were so dominated by this species entirely cloaked in large white flowers, it appeared from a distance that snow had come early. As I flew home from Puerto Montt, I peered from the window upon the hills long after departure and could still detect the overt whiteness of the landscape from this single species. In my luggage stowed beneath, I had jars of miel de ulmo as gifts for friends, the distinctive and boastful honey made from this very tree.

Eucryphia cordifolia is one of two species in South America. The other, Eucryphia glutinosa, is the only deciduous species of the genus and the hardiest of the lot. In the Heronswood collection, we boast a lovely dwarf, globe-shaped cultivar of this species (“Snowball”) as well as a standard-sized specimen with exquisite double flowers(‘Flore Pleno’). An arranged marriage between these two South Americans at Nymens Garden in West Sussex, U.K., resulted in Eucryphia x nymansensis. A century after the union , it remains one of the most frequently encountered Eucryphias in the Pacific Northwest.

One must travel much further west from Chile to mountainous habitats in SW Australia to find the remaining five species of Eucryphia. As a matter of fact, it is for the general remoteness of the genus at large that resulted in its generic name meaning well concealed. Of the five Australian species, only three are considered hardy in our region; Eucryphia lucida, E. milliganii and E. moorei. Though there is a lovely and rare pink form of Eucryphia lucida in blossom at Heronswood, as a whole it would seem as if the South American species are a better choice for gardeners in mild, maritime climates of the greater PNW (an exception being Eucryphia x intermedia, a hybrid between Eucryphia lucida and E. cordifolia).

This Friday, Saturday or Sunday, we welcome you to Heronswood to see our world of plants on display and the garden in peak form. While you are here, seek out and for a moment marvel in the most beautiful flower in the known Universe.