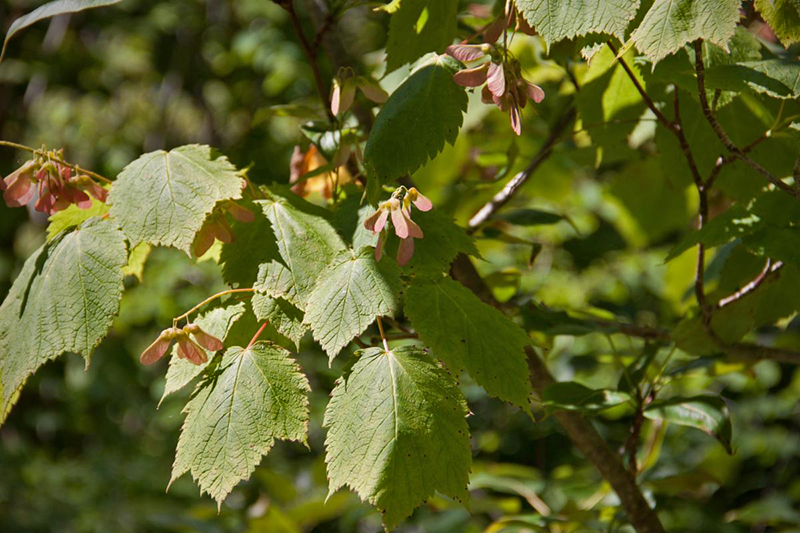 Vacation season is upon us and yet the usual exodus is largely on hold this year. As much as I love Kitsap County, I’m becoming increasingly frustrated by my inability to drop everything and fly to some faraway place. Of course, when I am away, I spend most of my time looking at plants. But there’s something different and special about ambling through areas unknown, eyes to the ground, camera to hand, looking for that weird, rare or pretty plant that I’ve always wanted to see. In honor of all those holidays that won’t happen, I’m focussing this missive on a plant I saw last summer, whilst on vacation in Michigan, that has strong Heronswood connections.

Maples are members of the genus Acer and they’re much in evidence here at Heronswood. Most of our maples are Asian, collected by Director Dan Hinkley in China, Vietnam or Japan. They range from the dainty Japanese Acer palmatum, weeping down our Rock Wall, to modest trees such as Chinese Acer davidii, which looms large above the Folly. These trees bring grace and color into the garden. Fall foliage is often superb, while patterned bark and delicate flowers add their own points of interest. Some are evergreen, while the deciduous species typically have fine canopies, allowing light to reach the many interesting herbs growing on the forest floor.

American maples are not a significant component of the collection, however. Native big-leaf (Acer macrophyllum) is common around the margins, plus we have a single much-loved vine maple (Acer circinatum). The only other American Acer is A. spicatum, collected by Dan on Mackinac Island, which sits in the strait separating Michigan’s upper and lower peninsulas. This plant has a checkered past, having almost died, but is now growing and flowering freely in the Woodland Garden. In July of 2019, I visited the island on a family vacation, and took the above photo. Whilst I knew we had this species at Heronswood, I didn’t know Dan had collected it on this very same island. Like the maple, Dan’s a Great Lakes State native and spent some of his youth working on Mackinac.

It’s a small world when both Dan and I should independently observe this same tree species on a small island half a continent away. Yet, with so many restrictions on travel, the world feels larger today than it did a few months ago. If you’re feeling hemmed in, come to Heronswood, where you can enjoy plants from every continent but Antarctica, all whilst enjoying a gentle stroll in the sun. We are open Friday to Sunday, 10am to 3pm.