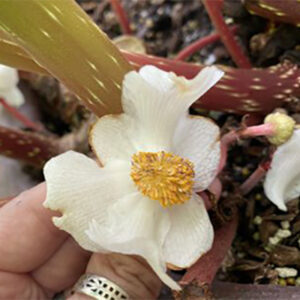 The female (left) and male flowers of Begonia aborensis, collected in India.

The signs are all there. Fall is on its way and our autumnal ensemble is beginning to bloom. No fall color on the trees yet, but the cyclamen are starting to flowers and as these tiny treasures appear around the garden, the end of summer is certainly on its way. There’s still plenty of color to enjoy. Hardy gingers are stealing the show right now and asters are waiting in the wings, ready to take over. Dahlias and hydrangeas are hanging on in there and autumn crocus are beginning to appear. Heronswood truly looks magical right now – come and see the show!

Behind the scenes, another fantastic flower is also making an appearance. Begonia aborensis, wild collected in northeastern India by Dan Hinkley, is blooming in our greenhouse. The flowers may not appear to rival the splendors of hydrangeas or hardy gingers but, for a begonia, they are pretty special. Each is an inch in diameter with white petals and a delicate fragrance. Though large, they readily disappear under the canopy of massive leaves, being held just above soil level. Interestingly, last year this plant only produced female flowers, but this year, there are male flowers, too.

Most plants produce flowers that are hermaphrodite, meaning they have both male and female parts within a single flower. Most begonias however produce separate male and female flowers, usually on the same plant. They are easy to tell apart. Female flowers have a large ovary behind the petals (see above left), in this case it is red with white spots. The ovary contains ovules that once fertilized, will become seeds. Male flowers completely lack the ovary, but have yellow, pollen-bearing stamens. Begonias are pollinated by bees attracted by the yellow pollen of the male flowers. They are equally attracted to female flowers, which have an elaborate branched yellow stigma in the center. The yellow color lures bees which may already be coated with begonia pollen, allowing the female flowers to be fertilized. However, female flowers are deceptive and provide no pollen reward to the bees. Effectively, female flowers mimic male flowers in order to ensure their own pollination. Thankfully, begonias are readily propagated by cuttings, so we don’t need bees to make more plants.