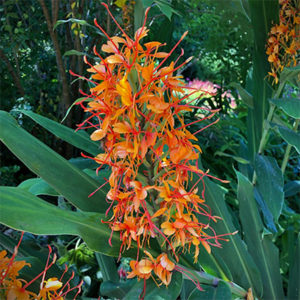 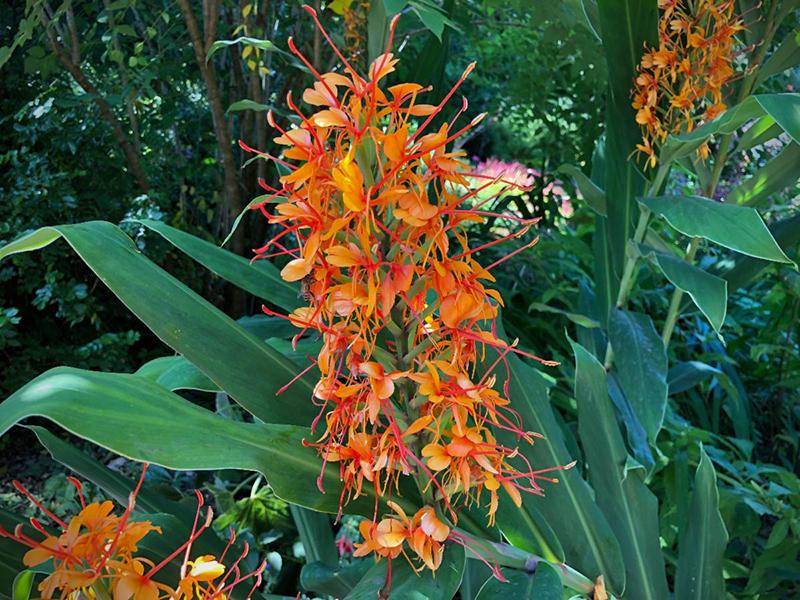 The elaborate flowers of Hedychium ‘Tara’

Late summer and many plants have passed their peak, but while other flowers fade, hardy gingers are at their blooming best. Here at Heronswood, Hedychiums are in their prime, with proud spikes of pungently-scented flowers in several hot colors. Perhaps the best-known genus of hardy gingers, Hedychium offers plants in an array of sizes, with intricate blooms that scream of exotic origins. Other Heronswood ginger genera include Cautleya and Roscoea, both of which are flowering abundantly now, so come and visit for a true taste of the tropics

The ginger family (Zingiberaceae) is best known for its spices, which include ginger, turmeric and cardamom. These plants produce a subterranean stem, or rhizome, that snakes along just below the soil surface. In order to prevent hungry animals from devouring this crucial organ, Nature has equipped them with piquant chemicals that deter most predators, but not us. We humans have developed a taste for these compounds and now farm gingers to produce spices commercially. A curious quirk of gingers is that they don’t produce upright stems, as their real stem is horizontal. Instead, their leaves are wrapped around one another to create an upright pseudostem – apologies for getting technical! If you slice through the pseudostem, you can see the multiple layers of leaves within, and they provide enough support to hold the flowers aloft.

Ginger flowers are also not what they seem. If you remember your high school biology, then you’ll know that flowers contain four structures: sepals, petals, stamens and pistils. In most flowers, the petals are the colourful parts, attracting pollinators, but in Hedychium, the petals are inconspicuous. It’s the stamens that do all the work; one is fertile, producing pollen, but the other four are modified into elaborate and elegant petal-like structures. Though the flowers are deceptive, their beauty is real, so visit Heronswood this weekend to see them at their best.