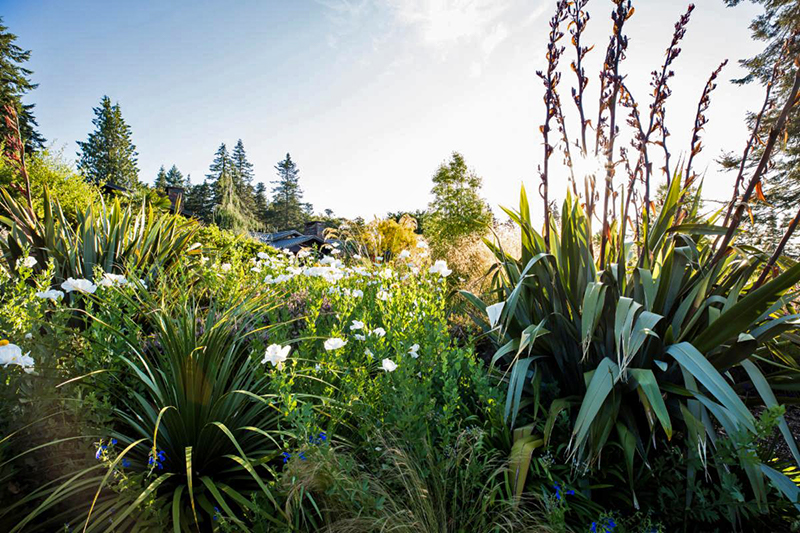 The Remarkable Foliage and Flowers of the Genus Phormium

Although gardeners of the Pacific Northwest have long considered New Zealand Flax to be indispensable in adding an exclamative lift to any landscape composition, there is, as there are with many plants with which we associate in our gardens, an inherently rich natural and ethnobotanical history imbued with the genus Phormium.

Phormium translates from Greek to “basket”. Though it was first collected and described by botanists during Captain Cook’s second sojourn in the south Pacific in 1773, it was afterward that traders noted the native Maori weaving with its leaf and root fibers. Provided the common moniker of New Zealand Flax, it mustn’t be confused with the flax of Euro-Afro-Asian commerce (Linum usitatissimum) cultivated for millenium for its nutritious seed and fine fibers used for weaving linen. 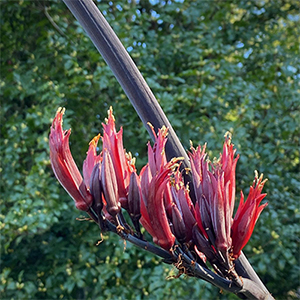 There exists only two species of Phormium; the Mountain Flax, Phormium colensoi (wharariki in the Maori language) and its more robust coastal counterpart, Phormium tenax. (harakeke). From these two species, the first inhabitants of New Zealand had identified over 60 “cultivars” before Cook’s arrival whose individual attributes contributed to better quality rope, rafts, linen, mats and other items. It is of interest to note that up until 1965, the U.K. Postal Service bound all of its packages with sisal made of Phormium tenax grown in plantations on the tropical island of St. Helena. (a considerable distance from its native haunts!)

The handsome flowers of Phormium tenax– red, nectar-rich upturned cups- are presented on stout stems rising to 8′ or more. Though pollinated naturally by a nectar-feeding bird, the tui, our native hummingbird species do not turn their beaks up to its copious ambrosia, so easily accessed by lighting upon its sturdy armature.

In the garden at Heronswood, we have for many years used selections of Phormium for the immediacy of vertical line they present in our borders as well as the colorful sword-like leaves of some cultivars. That we once had to dig these in winter for protection, and no longer must, might be telling in regard to the real science of climate change. The flowers are just opening this week, awaiting your admiration as well as a few of our resident hummers.