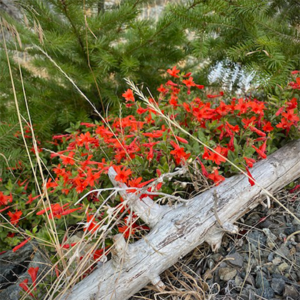 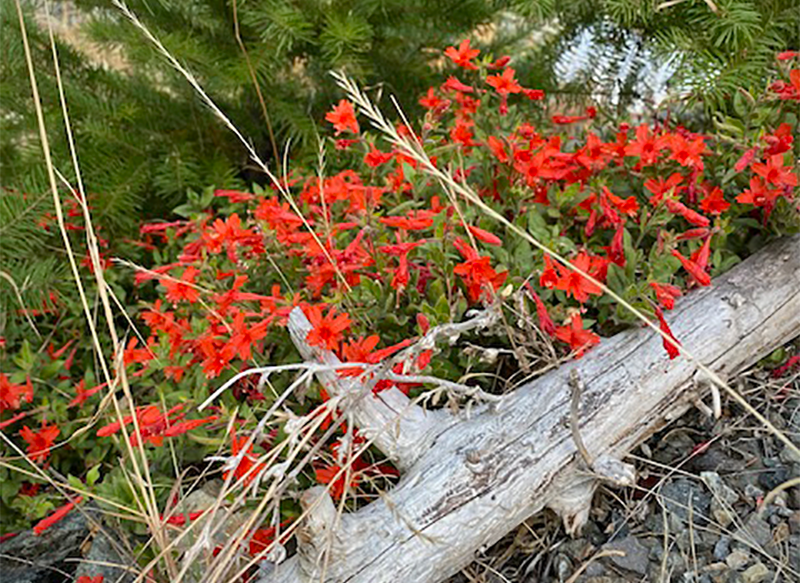 Epilobium canum in the Siskiyous of S. Oregon

Over the past weekend, I had the immense pleasure 0f returning to the remarkable mountain ranges that encompass the southwestern corner of Oregon and northwestern California. It is hard to encapsulate the unique qualities of the flora and the forces that created it in a short piece on a single plant. Suffice it to say that its geology – much of it comprised of veins of serpentine – and the fact that it was not scoured clean during the last glacial epoch makes it one of the most fascinating botanical wonders of the world.

The last time I had visited the Siskiyous, sadly over 25 years ago, one of the denizens I had admired was known as Zauschneria californica, a clever drought tolerant perennial herb in the Evening Primrose family (Onagraceae) with, normally, vibrant orange or vermillion flowers produced late in the season on short, colonizing stems. We have grown many forms of this species at Heronswood over the years, including a silvery-foliaged variant from Catalina Island as well the eponymously colored ‘Solidarity Pink’. It was with renewed interest in the variation that exists in its ranks that I observed it on this excursion with good friends Sean Hogan, Preston Pew and Shayne Chandler.

Since my last visit those many years ago, the mountains and plants have remained virtually the same though the ever mutating tome of botanical Latin has not. The genus Zauschneria has given way to a more ubiquitous and perhaps more ruffian genus, that of many species of fireweeds and willow herbs; Epilobium. To make matters more confusing, the new specific epithet of canum has been attached.

All gardeners in the PNW are familiar with this genus whether or not they have mastered botanical latin. The perennial fireweed, Epilobium angustifolium, does indeed colonize sites of wild fires almost immediately after a burn and puts on dazzling shows of tall stems to 5′ clad with pink flowers in summer. It is a favorite plant of apiarists, producing a richly flavored honey with a buttery finish. It is also a garden thug. One need not have a landscape inferno to have an infestation of this plant. While weeding it, the tiniest bit of root left behind will regrow and more resolutely the following year. At least it is comely in appearance when in blossom but beware its charms when it invites itself in for a short visit.

Another species, Epilobium latifolium, the common annual fireweed, is not pretty at all. Its seeds stealthily float into your garden in autumn and germinate quietly the following spring, leaping to 6′ or more while you are sleeping in June and July. You generally discover specimens of this weed approaching the size of old growth redwoods while showing friends around your kempt landscape in August. A bad cousin that is gratefully easy to weed.

It is appropriate to note that both of these species have recently been sunk into the genus Chamaenerion. It is also important to note that neither have changed their habits of annoyance after being annointed with a more difficult moniker to spell and pronounce.

But it is the species of Epilobium, once named for the Golden State – now E. canum – that is to be sought and grown. It thrives on neglect in poor soils in full sun and with little supplemental water, providing a dazzling splash of autumnal tones in, well, autumn. Sean Hogan’s Cistus Nursery propagates and distributes numerous forms of Epilobium canum, while you can appreciate its charms now while visiting Heronswood during our final weekends of being open to the public this year. Our staff will gladly point you in the right direction to admire all that this noble native perennial can bring to our gardens.

Under any name, plants possess that thing of magic and majesty that will fill me with awe and wonder no matter what mountain, forest, desert or prairie I find myself.