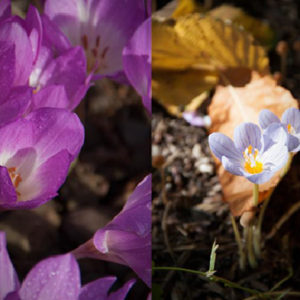 Don’t Get Your Crocus Crossed

Hard to believe I’m saying this in August, but fall is here. Certainly, that’s what some of the plants at Heronwood are saying. While our herbaceous borders are still afire with colourful lilies, dahlias and agapanthus, a few fall blooms have started to appear, including cyclamen, asters and colchicums. Of course, plants don’t operate from a calendar, instead responding to decreasing temperatures and reduced light levels. Two of the stars of any fall garden are the autumn crocus (Colchicum) and the autumn crocus (Crocus), often confused, but easily grown and hugely rewarding. Let me explain the differences and the similarities.

The genus Colchicum gets its name from the ancient nation of Colchis (in modern-day Georgia), and is the namesake of the family Colchicaceae (which also includes excellent garden plants Disporum and Uvularia). Most of the commonly available varieties bloom in fall, though spring-flowering colchicums do occur, and the blooms typically appear before the foliage. The strappy leaves are not especially attractive and often confuse gardeners when they appear in spring, long after the flowers are forgotten. This lack of foliage at flowering time led to some colchicums earning the moniker ‘naked ladies’.

True Crocus are members of the iris family (Iridaceae), their name deriving from the Greek word for saffron, harvested from Crocus sativus. Though many varieties are spring-flowering, several bloom in fall. Compared with Colchicum, their leaves are small and grass-like, typically appearing with or shortly after the flowers. The main difference between the two genera is the number of pollen-bearing stamens in each flower, six in Colchicum and three in Crocus. This feature is easy to see, though a magnifying glass will help. Worth mentioning too that Colchicum species are highly poisonous if ingested, unlike Crocus, though I wouldn’t recommend eating them either, unless you grow true saffron.

Both types of autumn crocus are easy to grow. Plant the corms in a well-drained soil, as they are liable to rot if kept too wet. Both thrive in sunlight, though Colchicum can take more shade – aim to plant them where their flowers won’t be submerged beneath floppy summer perennials. Here at Heronswood, we have several different autumn crocus on display. If you can tear yourself away from our summer exuberance, look out for these subtle harbingers of fall.